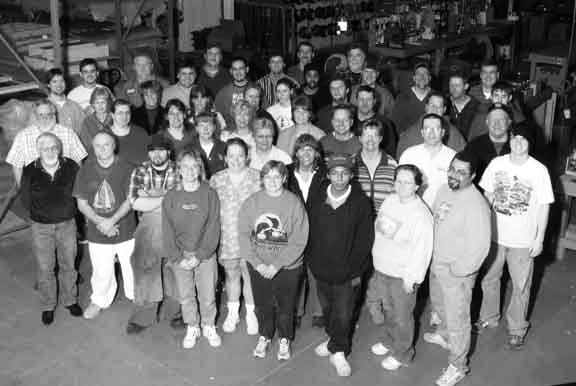 Electro Industries was started in 1973 with one product, a gas-fired air make-up heater for confinement buildings with one customer, Aerovent Fan and Equipment of Lansing, Michigan. Bill Seefeldt used his engineering experience to bring that product to maturity and then decided that diversification needed to be the next priority. From prior contacts with the rural electric utilities he began developing a comprehensive line of products for load management applications. Thus, Bill and Merrlyn Seefeldt founded Electro Industries and it became incorporated on January 1st, 1974.

From there things started to move rather quickly and we were well on our way to becoming the experts in the heating control world. At this time we introduced the Electro-Mate® plenum heater and the Electro-Boiler®, a dual heat conversion electric boiler. Electro now has the only electric plenum heater manufactured in the USA.

In the 1980’s we cast the vision of being “The Connect To People”. We considered radio receivers, line carrier receivers and/or TOU (Time of Use) meters as the load management communication device, but in order for the power company to further implement their load management program, these devices need to “connect to” the hardware which actually does the work. This is something we could develop and we became very successful at it.

As our experience and reputation grew in the Upper Midwest we developed a full line of load interrupt relay and sub-metering controls called Peak Interrupters. These quickly became a fast-growing product line throughout the 80’s.

Throughout the history of load management applications, the proper interrupt backup heat and comfort of heat pumps were always an issue. Through the years various relay based interfaced controls were developed primarily to add installation ease and standardization for load management control. As a result we became a third party knowledge base and interface control supplier for power company customer service departments and dealers/contractors. Realizing the need to increase air source heat pump comfort and to more effectively integrate our Electro-Mate plenum heater with the classic dual fuel heat pump, the WarmFlo smart heat pump controller opened up a new future for the original Electro-Mate and for electric utilities interested in selling more power. WarmFlo is the most versatile and universal heat pump controller available and is configured for most heat pump brands and gas furnace combinations.  It is truly a third party value added controller.

In 1999 we developed a standby generator transfer switch. The primary benefit Electro-GenConnect had over traditional techniques is that it is installed behind the meter socket and no building re-wiring is required. Electro continues to manufacture transfer equipment as an OEM to generator manufacturers.

In the early 2000’s Bill partnered with Purdue University to produce a new heat pump system called the NorAire®, which can pull out energy from -30 degrees for three integrated outputs – hydronics, forced air and domestic hot water. We have continued to better and make additional improvements throughout the years, as our customers have requested.

As Electro continued to grow, Bill Seefeldt continued at the helm and his wife, Merrlyn, was always close behind. Merrlyn has gone from being the only office staff to becoming Bill’s Support Services as the years went by. In 2015 they both retired and have stepped away from the day to day running of the business. Throughout the years all four of their children have been involved in some way with Electro. Their son, John, is currently serving as the CEO and their daughter, Krista, is the President of Electro.

In 2009 Electro made a major decision and purchased a heat pump company in Winkler, Manitoba called Northern Heat Pump. This allowed Electro to produce their own geothermal heat pumps called the Northern Heat Pump series. Electro continued in that market until 2014, and then sold that product line to continue to focus on efforts in the electric utility world.

The year 2020 brought Electro to an “all in one” unit called the EZBoiler Series. This is truly a “plug and play” unit which contains a pump, expansion tank and controls conveniently all inside a single enclosure. Thus making a clean and simple install as well as a much less time consuming initial install. Our contractors and wholesalers are thrilled to have this as an option.

Electro Industries is unique in that we not only internally design our products, but we also have the ability to fully control all aspects of our products from inception to final delivery within our large facility in Monticello, Minnesota. We consider ourselves a complete “cradle to grave” manufacturer and are proud to be an American made company. Our reputation has allowed us to diversify and continues to give us additional opportunities to our valued customers as an OEM Manufacturer.

We also pride ourselves with an excellent technical service team, where your needs are our number 1 priority. We continuously and successfully strive to have the best quality product available for residential, commercial and industrial applications.

Through the years we have employed anywhere from 2 to 118 employees. We value our employees and realize they are a great contributor to our overall success.  We value family and faith and believe all our successes are blessings from God to better His Kingdom.